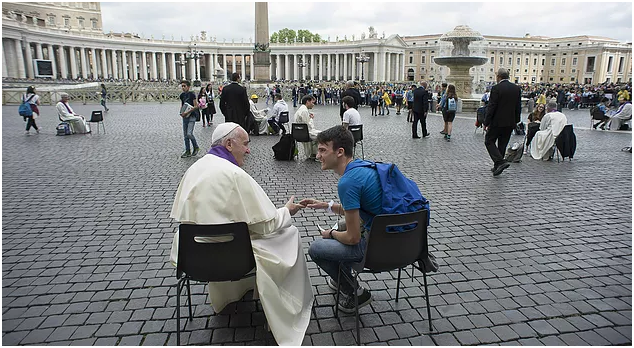 Pope Francis has many ways to talk to the world, including his @Pontifex Twitter account with 13 million followers. His speeches, homilies, teachings, messages and, recently, his encyclical on climate change are filled with evidence of his thinking on crucial issues of our time.

Dear young people, do not bury your talents, the gifts that God has given you. Do not be afraid to dream of great things!

I see clearly that the thing the Church needs most today is the ability to heal wounds and to warm the hearts of the faithful. I see the Church as a field hospital after battle.

The family is where we are formed as people. Every family is a brick in the building of society.

Instead of being just a Church that welcomes and receives by keeping the doors open, let’s try also to be a Church that finds new roads… to those who have quit or are indifferent.

The ‘Big Bang,’ that today is considered to be the origin of the world, does not contradict the creative intervention of God. On the contrary, it requires it.

Today, the news is scandals; that is news, but the many children who don't have food - that's not news. This is grave. We can't rest easy while things are this way. If a computer breaks, it is a tragedy, but poverty, the needs and dramas of so many people end up being considered normal.

We all have the duty to do good.